is an antique city on a ridge of the steep, 360 m high Messa Vouno mountain on the Greek island of Santorini. It was named after the mythical ruler of the island, Theras, and was inhabited from the 9th century BC until 726 AD. Starting in 1895 the city was systematically investigated by Friedrich Hiller von Gaertringen, who excavated there until 1904. Later excavations by N. Zapheiropoulos between 1961 and 1982 under the auspices of the Archaeological Society of Athens unearthed the city’s necropolis in Sellada. Findings from these excavations are on exhibit at the archaeological museum in Fira. Excavation work was again taken up between 1990 and 1994 under the leadership of Wolfram Hoepfner of the Free University of Berlin and resulted in a more precise understanding of the history of the southern Aegean.

The ancient city consisted of a street almost 800 m long and especially wide for its time (between two and four meters) extending in a southeastern direction and containing several imposing buildings. A small cul-de-sac branches off at right angles and at its termination, high up on the mountainside, were the headquarters of a garrison stationed in the city. After about 200 meters of street the city expands to cover an area of about 100 x 100 meters on an exposed plateau high above the rocky coast. Residential areas are grouped around anAgorawhich is across from a theater built into the lower slope. Separated off and facing the sea at the eastern tip of the plateau is a small sacred area with temple grounds and public facilities. All buildings are constructed of the local limestone of the mountain itself. Wood was rare on the island and seldom used for building.

At the base of the mountain at the edge of today’s city (Kamari) was a necropolis which was used almost as long as the ancient city existed. The city also had a harbor, not yet precisely localized, which supposedly had shipyards and lodgings for sailors and soldiers. Ancient Thera had two seaports, namely Oia (not to be confused with modern Oia ) and Elefsina , located respectively at present-day Kamari and Perissa.

In archaic times the city was an unimportant settlement at the southern periphery of the Cyclades. It was founded by Doric colonists from Sparta, who recognized the strategic value of its location on a rocky ridge.Herodotus and Pausanias give accounts of the mythical ruler, Theras, a descendent of the Phoenician ruler Cadmus and son of the king of Thebes , Autesion , who ruled over Sparta and Laconiaon behalf of his underage nephews Eurysthenes and Procles. After they came of age he founded a new settlement on the island of Kalliste , which was subsequently named Thera after him. This name was also given to the city, of which there is archaeological evidence dating from the 9th century BC. Herodotus goes on to write of a seven-year drought around the year 630 BC which forced the inhabitants of Thera to send colonists to Cyrenaica in today’s Libya.

This settlement was so successful that Thera long enjoyed a good reputation as the mother city of Cyrene despite its own relative unimportance. A collection of 760 coins were found dating from the 6th century BC, which give evidence of a modest amount of trade links to Athens and Corinth to the west and Ionia and Rhodes to the east.

Unfortunately people with disabilities and health issues may not have easy access due to several meters and the ground its rocky as any other mountain.

Do not hesitate to contact us for additional information. 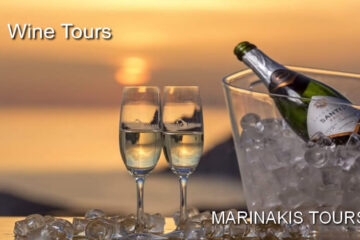 Bus tours in Santorini Wines & Foods ! Book a seat now! The Santorini Experience A 4.5 hour tour between the most distinctive wineries of the island SEE MORE! 100€   Santorini-akrotiri Sip and explore Read more… 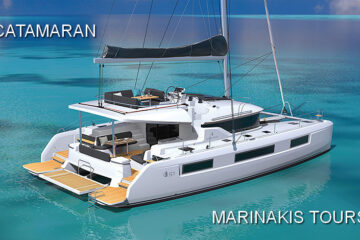 Santorini – Catamaran Marinakis Tours Travel, can arrange the most desired tours with the most sure Catamaran in Santorini, with well trained Catamaran staff, with a fantastic lunch menu and view of the best beaches Read more… 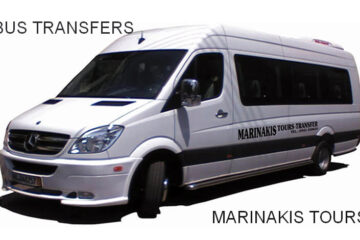 Book a transfer with Marinakis Travel Agency! We quarrantee the best service together with the most economical prices in the island. You will be transfered safely from the Airport or Port of the island to Read more…